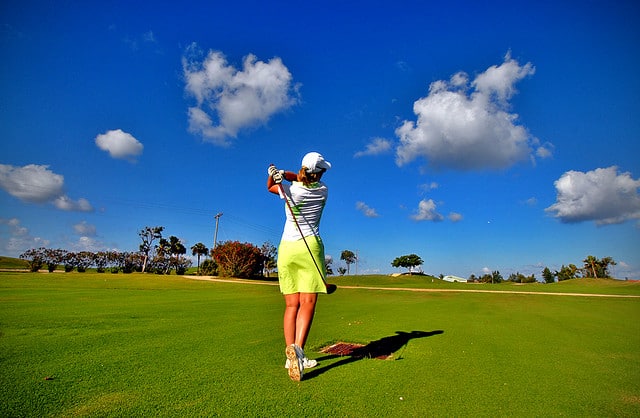 Many factors influence the average distance for women’s golf clubs that you achieve with individual clubs.

This can vary slightly from day-to-day depending on your physical condition on the day as well.

How far should a woman hit a golf ball? How much shorter are ladies golf clubs?

There are many factors to take into consideration when attempting to determine the average distance that women can hit a driver.

Factors such as loft, shaft flex, swing speed as well as the height that you tee the ball up can play a significant role.

Considering all these factors and deriving an average is no small feat.

Fairway woods are not aimed at achieving the same distance as a driver but to serve as tools to hit long approach shots and sometimes used from the tee.

The average distance a typical woman amateur golfer can expect with a 3-wood is 125 yards while the 5-wood average is 115 yards.

Hybrids have become extremely popular in replacing long irons such as 3- and 4-irons as they are much easier to get the ball airborne and hit more accurate and longer shots.

Generally, you will get between 5 and 8 yards more distance from a hybrid than a similarly numbered iron.

You can expect to achieve approximately 105 yards on a well-struck 3-hybrid, between 95 and 100 yards with the 4-hybrid.

Hitting a consistent distance with your irons is extremely important as most of your approach shots and scoring shots will be executed with these clubs.

Depending on the manufacturer’s loft range your distance may vary from the averages discussed in this article.

A 2-iron is extremely difficult to hit by the average amateur golfer, yes that includes men. The average distance you can expect is 115 yards. Replacing the 2-iron with a fairway wood or hybrid is highly recommended

The 3-iron is more commonly available and easier to hit than a 2-iron but could create a lot of difficulty for the average golfer. The average distance you can expect is 105 yards.

Many golfers have replaced their 4-irons with a hybrid for simplicity and ease of use. The average 4-iron distance is accepted to be 95 yards.

The 5-iron is sometimes included in packaged set deals for women but frequently replaced by a hybrid. The average distance for a 5-iron is 85 yards.

Most sets come with irons from the 6-iron upwards as they are easier to control and hit consistently. The average distances for a 6-iron are 75 yards, 7-iron is approximately 65 yards.

Inclement weather and rain make the air thicker and heavier thus reduce the distance that the ball travels.

In icy wintry weather, the core of the golf ball does not expand as much as in temperate conditions thereby resulting in shorter distances

Your physical characteristics, flexibility, and core strength greatly affect the distance you get out of your clubs.

A strong core can create maximum torque in the backswing that translates to higher swing speed and increased distance.

Tall women that are flexible will be able to create the largest arc thus creating optimal swing speed.

This does not mean that they are the only ones that can generate high swing speed as can be seen on the LPGA and LET tours.

The loft angle on your clubs determines the height of the ball trajectory. The latest trend among manufacturers is to put stronger lofts on the irons to produce more distance on every club.

Relationship between loft and distance

There is no regulation on lofts by the governing bodies of golf such as the USGA and it is left to the discretion of the industry as a whole.

In the pursuit of satisfying the ever-increasing demand for extra distance, manufacturers have turned to strengthen the loft on their irons to achieve more distance.

The standard loft on a 7-iron was approximately 36 to 37-degrees but could now be as low as 31-degrees. this is the equivalent of a 5-iron in a set that is in line with the older accepted lofts

The change is most prevalent in ‘game improvement’ sets to aid you in getting a strong trajectory for extra distance.

Skillful players do not require the extra distance therefore they prefer the weaker lofted clubs for enhanced accuracy and distance control.

How far should a woman hit an 8 iron?

The average golf club hitting distances for an 8-iron is around 110 yards,

How far should a woman hit a 9 iron?

The average golf club hitting distances for 9-iron is100 yards.

Wedges are your biggest scoring clubs as they are used within 100-yards. 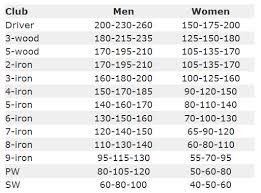 The wider the arc that you swing your golf clubs, the higher the speed that you can generate.

A faster swing speed, solid contact in the sweet spot of the clubface, and a square clubface at contact will provide more distance.

Ball speed is generated by the amount of compression applied to the ball at impact.

The quality of the ball strike, also known as the smash factor, plays a significant role in how fast the ball travels off the clubface.

The construction of the clubface and the trampoline effect adds to the ball speed and ultimately the distance that the golf ball travels.

I frequently get asked – Do ladies golf balls go farther? Ladies’ golf balls are designed to react best to the lower swing speed to achieve the maximum possible distance.

They will not travel as far as someone with a high swing speed using golf balls targeted for use by men.

You should understand where your golf game is at and the distances you hit every club in your bag to reduce your handicap.